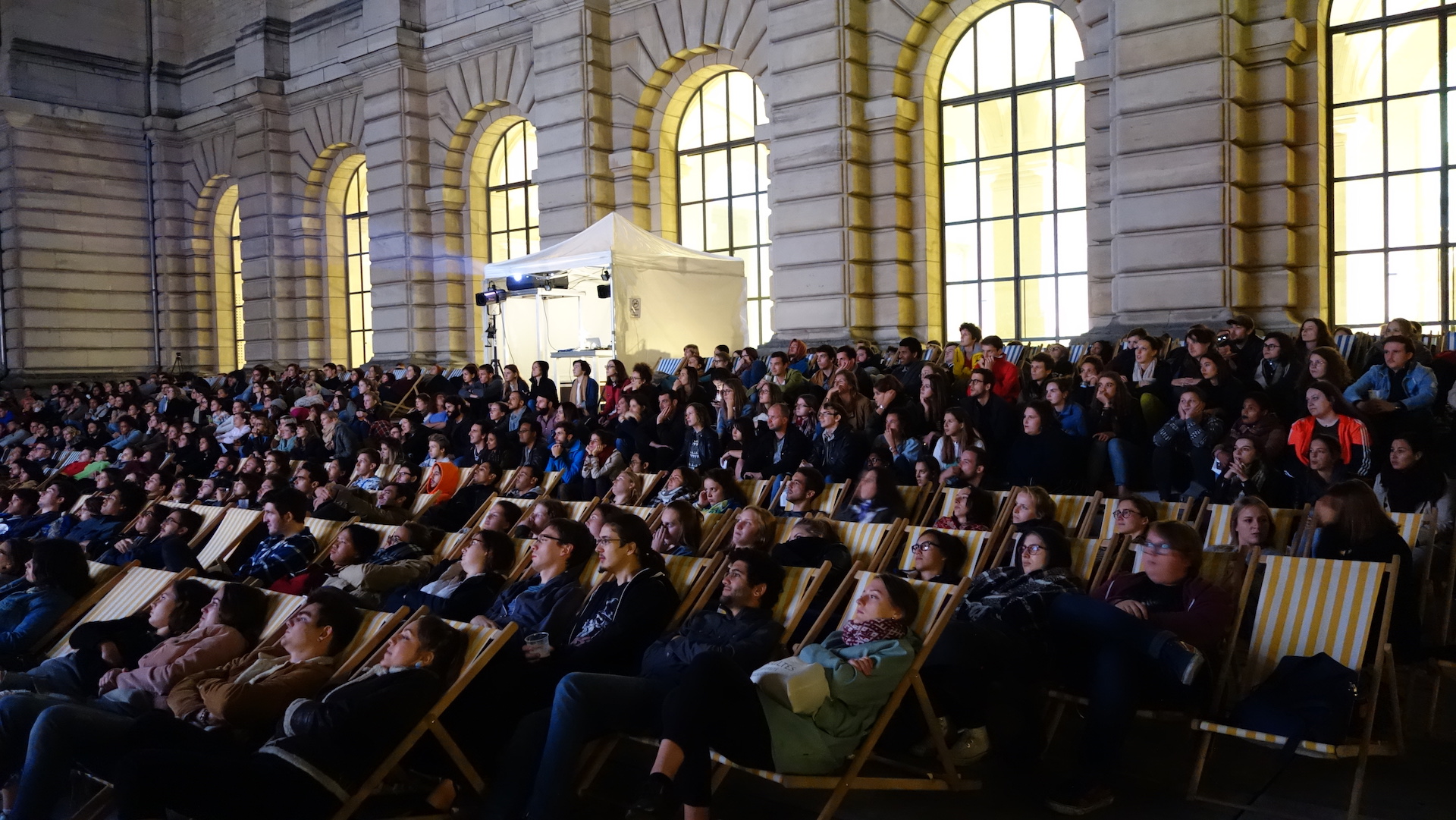 1998: Creation of the organisation by a few short film enthusiast students.

1999-2000: Occasional short films programming and image education actions
From the beginning, the organisation has developed skills related to film programming, exhibitions and conferences curation and to the organisation of awareness-raising or creation workshops.
In 2000, the “Rencontres vidéo” (Video Meetings) happened. This event became the first “Rencontres Audiovisuelles” (Audiovisual Meetings) the following year.

2001: 1st edition of the International Short Film Festival
The 1st “Rencontres Audiovisuelles” (Audiovisual Meetings) offered a video competition, practical workshops and meetings with professionals.
The success of the Festival allowed it to become a yearly event (which would become the International Short Film Festival in 2004) and to expand the team by recruiting the first 2 employees.
The year 2014 is a turning point for the programmation of the Festival with the first outdoor screenings and the awards list entirely based on audience balloting, which are still what makes the event so special today.

2002: 1st edition of the Nuit de l’animation
In October 2002, the first Nuit de l’animation (Animation Night) was organised, after a proposition by the AFCA to join the Fête du cinéma d’animation and organise an event for the City of Lille.
Gathering 600 people at the Splendid for its first year, the Night doubled its audience the following year, at the Sebastopol Theatre. Since then, it has been a key moment awaited by the public every year in September/October. The event was also organised in Dunkirk from 2005 to 2013.
Since 2018, the Night is organised every year in late November, as part of the Fête de l’anim’; a parallel Nuit de l’Anim’ has also been held in Amiens for the first time in 2019.

2002: 1st edition of Ciné Soupe
After the International Short Film Festival 2002, the awarded films were showcased across the region through the creation of a new project: Ciné Soupe (experimental year in 4 cities). Ciné Soupe stopped in 30 cities in 2003 with a more suitable programme, specially created for the event.
From 2012, Ciné Soupe has also been developed in Belgium in association with the asbl Bah Voyons.
Nowadays, Ciné Soupe travels around 60 cities and villages in the Hauts-de-France region and in Belgium, and offers school screenings during the day.

2002-2003: Development of programming and images education actions
Around Ciné Soupe, many requests from regional stakeholders led to collaborations: support for cultural, social, educational projects that include an audiovisual dimension.
Rencontres Audiovisuelles became a resources center, for screenings but also for awareness-raising and images education actions as well as creation workshops.
Since 2002, the organisation has taken actions in schools, for educational screenings and audiovisual creation workshops.
In 2003, an itinerant programme in regional universities was created, following a request from the Crous: Ciné Crous, renewed every year until 2016.
Thanks to its logistic skills, the organisation was also asked by the the CRRAV/Nord-Pas de Calais Region to organise the documentaries festival “Au Bonheur des Docs” in 2002 and 2003.

2004: 1st edition of the Fête de l’anim’
The success of the Nuit de l’animation led to a second yearly event in 2004, the Fête de l’anim’. This event is dedicated to animation in all its forms and has found its place in the cultural landscape, with its “general public” and “professional” aspects.
Organised in Lille and Dunkirk at first, the Fête de l’anim’ also took place in Tourcoing (Plaine Images, Le Fresnoy, Les Écrans), Roubaix (Le Duplexe) and Valenciennes (Serre Numérique) after that. Since 2018, the Fête de l’anim’ has been taking place simultaneously in Lille, Amiens and Arenberg Creative Mine every year.

2007: Opening of L’hybride
In order to extend the activity around the events led in the city and develop awareness-raising actions throughout the year, the organisation opened a permanent cultural venue dedicated to audiovisual media in Lille, L’hybride, with an original concept: a projection venue with a big screen, couches, a bar and an exhibition room, encouraging exchanges, conviviality and the pleasure of discovery around a programme now well-known for its quality and eclecticism.
For a few months in 2011, an “ephemeral hybride” was also developed in Béthune, as part of Béthune, Regional Capital of Culture.

2010-2013: Development of serious games Images 2.0 and Anim 2.0
In 2010, the organisation started to work on a new tool to use during its images education workshops: the serious game Image 2,0, completed in April 2011. With this objective in sight, the organisation then developed Anim 2.0 in 2013, a website dedicated to animated films specifically, consisting of a serious game and a creative unit.

2012: Development of Digital Stories
Rencontres Audiovisuelles are also interested in interactive works and the possibility to interact collectively during screenings. In 2012, the organisation developed a technology based on laser pointers: Digital Stories. This research and development project around collective interactivity aimed to create technologies that used different interfaces (laser pointers, tablets) and to produce or coproduce content dedicated to that purpose: interactive films, collective video games, interactive mapping or performances, etc.

2012: Organisation of the Ciné Addict contest
In 2012, Rencontres Audiovisuelles are asked to organise a scriptwriting contest and to provide support for the directing of films about addictions by the Regional Health Agency, in collaboration with the ANPAA (Association nationale de prévention en alcoologie et addictologie) and Dick Laurent.

2012-2014: European Project VIVID -Value Increase by Visual Design
From 2012 to 2014, Rencontres Audiovisuelles were part of VIVID, a European coordination project involving 9 European partners who are leaders in the visual design and visual technology sector. The aim of the project was to gather and optimise skills by supporting research and university exchanges, helping the entrepreneurship of young professionals and promoting visual design to the general public.
VIVID enabled international cooperation actions to be developed, as part of events focused on visual design and visual technologies. Several events dedicated to this project were offered as part of the Fête de l’anim or the International Short Film Festival.

2015-2018: European project Euranim – Boosting the careers of young animation artists with video mapping
Between 2015 and 2018, Rencontres Audiovisuelles carried the Euranim project, a large scale European cooperative project (Creative Europe), with 5 European partners.
The aim of the project was to strengthen the European skills in the video mapping field and to make it a dynamic sector that boosts employment in Europe, especially through residencies (including one at L’hybride in 2015) and the organisation of programmes dedicated to it during festivals such as the Fête de l’anim’ (video mapping workshop, Marathon de l’anim’).

2015-2017: European project TNCE – Trans National Creative Exchange
TNCE is a small-scale European cooperative project (Creative Europe) involving 4 European partners, as well as the China Academy of Art – Shanghai Institute of Design in China as a associate partner of the project from 2015 to 2017.
The objective of this project was to support the internationalisation of the students’ careers working in creative sectors in Europe and China. The Video Mapping Contest 2015 and some activities of the Fête de l’anim’ 2016 and 2017 were part of this project. L’hybride hosted the exhibition and the meeting for the closing of the project in 2017.

2016-2017: IEJ New Images Careers Project
The IEJ New Images Careers project is a project to help young people from the Nord-Pas de Calais Region to find a job in the image industry, as part of the Youth Employment Initiative programme (ESF Fund). The project is aimed at young people outside of employment and training. The objective of this programme is to position the participants in an active process and to give them the keys to build a path to these images careers. 4 specialities were offered: animated films, video mapping, video games, cultural mediation with a speciality in audiovisual.
After 6 sessions of 4 months between 2016 and 2017, the project stopped in 2018 before starting again in 2019 under the name “New Images Careers”, focusing on the jobs related to video mapping, as part of the Youth Employment Initiative programme (European Union) and the École régionale du Numérique (Hauts-de-France Region).

2016: Development of the Ma famille et les écrans project (Screens within my family)
Initiated in 2012 during the Village des Enfants (Children’s Village) of the Fête de l’anim, the “parenthood, screens, children” actions – dedicated to the support to parents in the use of images and screens by their children – became bigger in 2015.
2016 has been an important year regarding their development with the organisation of several exchange and practical actions (meetings with parents, parents-children workshops, practical workshops around new technologies, etc.), later gathered under the term “Ma famille et les écrans” (Screens within my family).
Simultaneously, a section dedicated to parents was created and developed on the Labo des images blog, offering advice, recommendations and ideas for activities to do as a family, in order to accompany the children in their use of screens, in collaboration with the partner structures.

2017: Launching of the Video Mapping European Center
The Video Mappin European Center was created in 2017, in order to create coherence between the various actions led and developed around video mapping and to achieve a complementarity of actions.
It aims to support the development of the video mapping sector in Europe, especially in the Hauts-de-France region, through research, training and creation.

2017: Creation of Loom Prod, video mapping production studio
A collective interest cooperative society associated with the Video Mapping European Center was created at the end of 2017 to answer all type of requests for video mapping productions.
Loom Prod gathers artistic, technical, logistical, producing and administrative skills and bring together many talents who participated in the programmes carried by the Video Mapping European Center.

2018: 1st edition of the Video Mapping Festival
The Video Mapping Festival acts as a highlight of the actions developed throughout the year as part of the VMEC. It aims to present video mapping in all its forms (monument, object, video game, immersive, interactive video mapping…) and offers contents dedicated to the general public, as well as professionals of the industry and students from Animation and Video Game International Schools .
Every year, the Festival offers IBSIC (Image Beyond the Screen International Conference), creative challenges, a 25 mapping tour in Lille during the Opening Night in spring, as well as around 15 stops in the Hauts-de-France region (April-September).